Flying from Cape Town directly to Victoria Falls is such a breeze, just 2 hours and 35 minutes on Kenya Airways and we were there. A great flight which goes onto Nairobi so only a handful of people disembarked which made immigration really easy. I have been to Vic Falls and waited a few hours to get through, but luckily this time it only took 20 mins. I purchased my visa (USD55) on arrival as I travel on a UK passport.

Wow, what a place! We were met by a lovely welcoming party who greeted us with nice cold towels and a welcome cocktail. There are currently three tree houses built, number 4 nearly complete and number 5 under construction. The whole lodge is connected by wooden walkways which sit about 2 metres above the ground. From the jetty you walk up a walkway to a lounge/dining room area which is decorated very tastefully. Above here to the right is the bar area which is elevated and has views out to the north of the island. 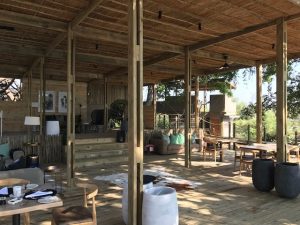 To access the rooms, you walk along the walkways above the ground, and as you enter the room, which is all made from pine wood, you have this amazing view across the Zambezi to the Zambian side of the River. All the tree house suites are facing east, along a very quiet part of the river, and all you can hear is the sound of the numerous hippos in the water. The bed faces the view with bi-fold doors so the room completely opens out. To the left is the bathroom with a freestanding bath, and as there are no water restrictions in this part of the world, it was fabulous to have a bath looking out over the Zambezi. There was also a large open shower, and again the bathroom had bi-fold doors which opened out giving you the feeling you’re outside with nature. 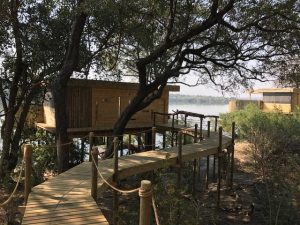 There is a very nice deck with a small private plunge pool and two sun beds. The rooms are equipped with air conditioning, a Nespresso machine, a mini bar and safe. We could actually still smell the newness of the pine wood. The rooms are built on stilts which will assist when the river flows at its highest during the months of March, April and May. The river can rise 5 metres in this period! As the rooms are only accessible from the walkway you do not need a ranger to escort you back and forth as you do at River Lodge on the mainland. 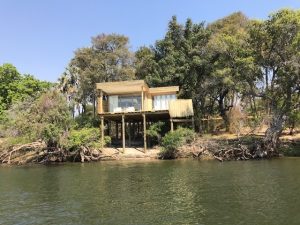 After a few G&T’s at the bar we had a fantastic dinner, and for those who need to stay connected, the lodge actually has full electricity and WiFi throughout, so there were plenty of people sharing their pictures of the days adventures.

We awoke the next morning just as the sun was rising at 06.10. I pulled back the blind, opened the doors and we watched the sun rise over the Zambian horizon. All you could hear were the hippos grunting and the unmistakable call of the Fish Eagle. Incidentally, we saw over 60 different bird species in the 4 days we were at Victoria Falls including a pair of Black Eagles. At breakfast we were joined by a band of Mongoose who were playing around in the sand close to where we were sitting. Amazingly you could identify which ones were the naughty ones. We also saw some Brown Fire Finch’s that are only found in this area. The chef Leo cooked some amazing food including delicious flaky croissants, from a kitchen on an island in the middle of the Zambezi.

We took the boat across to River Lodge and got a game vehicle to take us for a drive in the national park, where we saw two herds of about 20 elephants, a herd of about 60 buffalo and lots of buck (antelopes). I think for a traveller wanting a real game experience they need to combine the Falls with a Botswana trip to Chobe or the Okavango Delta, which are both easily accessible. The most amazing site on the drive was a Baobab tree we saw which was over 1500 years old. If trees could talk, I bet this tree could tell a few stories! 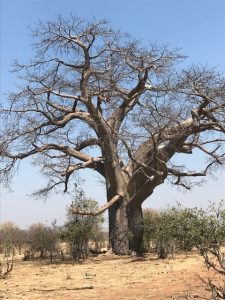 Back across the river for lunch and then out on an afternoon boat cruise – but after tea and an afternoon nap of course! It felt surreal; the weather was hot and humid and we were sipping a G&T whilst avoiding the pods of hippos, as well as the crocs lurking in the Zambezi. We were offered a canoe trip but I thought that there were way too many hippos around for my liking. We watched the sun setting which was stunning and then headed back to camp for dinner. You get your own butler at Island lodge and ours was called Reeves. He was brilliant and always smiling – really world class. At the Lodge every night the hippos leave the water and some take up home on the island below the rooms which added to the excitement. At night it really is so very quiet and peaceful. The next morning after a leisurely breakfast it was time to leave. I could have stayed here for a month, just to have that peace and tranquility.

We headed back over to the mainland to River Lodge which has a magnificent bar on the banks of the River. The lodge has 12 well-appointed luxury tents with some family tents with two rooms. From Victoria Falls River Lodge, we went to Victoria Falls Safari Lodge, where we stayed in the Safari Suites which open up to the national park. “Beware of the Crocodiles” was displayed on a very large sign, and I definitely recommend that guests should not venture off into the park alone, as attacks (albeit rare) can happen. 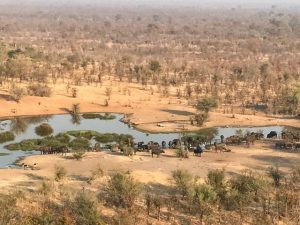 I must say the view from the restaurant and the pool deck at the Safari Lodge is amazing. It looks out across the wide-open expanse of the national park where you’ll see the numerous buck coming to drink at the water hole – who were also very wary of the crocs around. You’ll also see the resident Marabou Storks hanging out. The Safari Suites have an upstairs and downstairs and ours had two bedrooms and bathrooms, which are ideal for a family. There were a couple of large American groups at the hotel, as well as some Aussies, so a really good mix of English speaking clients, but a much bigger hotel.

After lunch at the famous Victoria Falls Hotel, which still retains its very colonial charm, dinner that evening was in the Boma at Safari Lodge. The Boma does serve its purpose and the international guests love it. The next morning we went to visit the Falls, which was a totally different experience to my last experience in April when the water levels were high and you got absolutely soaked – and I mean soaked! The water levels were now low and it was nice to be able to see the Falls, which were still powerful, but to see the water hitting the bottom is incredible. We saw the adrenaline junkies at Devils Pool, where the guides were literally balanced right on the edge of the Falls. On our way to the Falls we saw animals roaming freely, which is what makes this place so unique as there are no fences. Close to Ilala Lodge in the bushes were three Elephants having a feast right by the side of the road. Warthogs roaming in the town, and of course the Baboons were everywhere! We then went to the Lookout Cafe for lunch which overlooks the gorge where the white-water rafting starts and the gorge swing and zip line are. Fantastic views, and I believe the Full Moon nights here are fun too! This is where the pair of black eagles were also perched, which the staff said visit frequently. 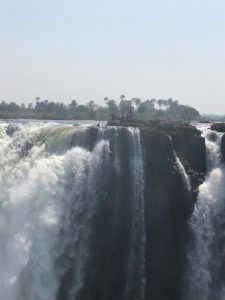 That evening we visited a local Restaurant called Zambezi House on the banks of the river, quite close to Safari Lodge. A very quirky place, but so well decorated and made out of shipping containers. It was recommended by Peter the manager of Victoria Falls Island Lodge, and it was superb. They also have a pizza oven where they cook excellent thin base pizza’s. This place is well worth a visit if you are going to Vic Falls. On the drive back in a taxi we had to stop as 60 odd buffalos were crossing the road, and this the main road. This place is still wild Africa at its best! 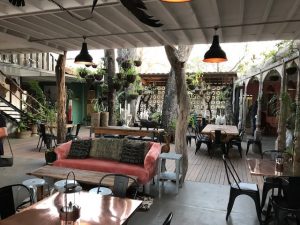 The next morning we caught the Kenya Airways flight back to Cape Town and were back in under 3 hours. Such a fantastic add-on to any Cape Town stay, and what a contrast. I will be back soon.